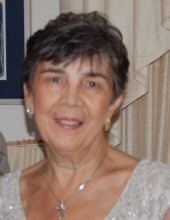 Luba Kostryk Darmochwal, 77, of North Royalton passed on December 30, 2017. She traveled a heroic ten year journey with cancer, demonstrating grace and bravery with every step. Luba was born August 11, 1940 in Bonovitch, Ukraine the daughter of Wasyl and Kathryn Kostryk. She was united in marriage to Michael Darmochwal on July 18, 1959, in Cleveland, Ohio. They nurtured their growing family and developed lifelong friendships together for almost 60 years.

In addition to Luba’s love, kindness, and dedication to family and friends, she was active in making the world a better place through her involvement in the community. This included her 50 year membership in the Ukrainian National Women’s League of America, volunteer fundraising work making pierogies at St. Josaphat’s Ukrainian Catholic Church, and actively participating in her daughters’ school, team and Plast (Scouts) organizations. Luba’s love of Ukrainian music and dance permeated her life with frequent attendance at social events, concerts, banquets and regular participation in the St. Josaphat church choir. She also enjoyed travel with family and friends, with favorites including visiting her birth home in Ukraine, Punta Cana and bi-annual beach vacations with her daughters and their families. However, above all, Luba was eager to express her limitless love and pride of her family including her four daughters and son-in-laws, and 12 grandchildren.

She was blessed to enjoy her last days surrounded by love from her family - husband Michael; daughters and son-in-laws Irene and Glenn Petillo, Chris and Mark Terpylak, Lesia and John Rehl, and Maria and Wayne Ringeisen; grandchildren Ryan and Andrew Petillo; Andrei, Tania (preceded in death) and Mikola Terpylak; Johnny, Dominique, twins Alexandra and Evan (preceded in death) Rehl; twins Hannah and Mia, and Ben Ringeisen; sisters Irene, Mary, Jean and brother Nestor; sister-in-law Anna; and numerous cousins, nieces and nephews here in the U.S. and in Ukraine.

“If there is no love, then life is not worth living.” Luba Darmochwal

To order memorial trees or send flowers to the family in memory of Luba Kostryk Darmochwal, please visit our flower store.