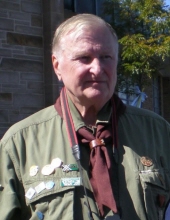 Adrian led a life of meaning, purpose and fun. He raised his family in the traditions and values of his upbringing. Central to this was his deep appreciation of the Ukrainian Scouting Organization (Plast) which he fell in love with during his childhood while he and his family were waiting to immigrate to the United States. He wanted to ensure the continuation and preservation of the traditions and values of Plast in his adopted home of ­Cleveland, Ohio.

Adrian was honored to be a member of the community who had the vision for the foundation of Pysanyj Kamin (PK). An architect and designer by trade he was able to provide vital details needed to assist the committee on important decisions regarding the plans and the actual build out of the property.

Adrian was also an avid sportsman and outdoorsman who organized multiple Plast camps and excursions in all seasons. Throughout his life he continued to travel and appreciate the world with his wife and children in the traditions of his Ukrainian scouting fraternity "Burlaky." Through these endeavors he formed lifelong friendships and had many experiences that he enjoyed sharing with all.

He was very proud that his children and grandchildren followed in his footsteps. It was Adrian’s dedication to his family and his willingness to help, no matter what the personal sacrifice, that will always be remembered by those who loved him.

Private services will be held on Monday, November 23rd at 10:30 AM at St. Josephat Ukrainian Catholic Cathedral. A celebration of life will be held when circumstances allow.

Donations may be made to either “Plast – Friends of PK” or St. Peter and Paul Ukrainian Catholic Church and sent to 10814 Lake Ave. Cleveland OH, 44102 in care of George Halarewicz.

To order memorial trees or send flowers to the family in memory of Adrian Stefan Halarewicz, please visit our flower store.