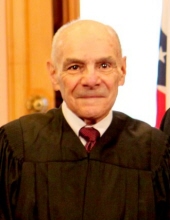 James P. Celebrezze, “Jim,” 83, of Cleveland, passed away on February 10, 2021 in Cleveland.
Jim was born in Cleveland on February 6, 1938 to Judge Frank and Mary Celebrezze. He was the youngest of six children. On November 11, 1967, he married his wife Daria (Yurkiw) in Parma. Jim earned a Bachelor of Arts in History/Political Science from The Ohio State University. After serving in the US Army from 1960-1962, he earned a Juris Doctor from Marshall College of Law in Cleveland.
Jim’s professional accomplishments reflect the importance that pubic service held in his life. A Member of the Ohio House of Representatives from 1963-1973, Law Director of both the cities of Brook Park and Broadview Heights, Judge on the 8th District Court of Appeals, Associate Justice on the Ohio State Supreme Court and later Judge on the Cuyahoga County Court of Common Pleas, Domestic Relations Division, in the seat now held by his daughter, Leslie Ann Celebrezze. His distinguished military service also includes achieving the rank of Commander in the United State Naval Reserve, JAG Corps, where he served as a Military Judge until his retirement in 1994.
Jim upheld the family tradition started by his father as well as his older brothers Chief Justice Frank and Judge Gerald as well his cousins, uncles, and nephews. He instilled the same dedication to that mission in his own children and grandchildren.
In his personal life, Jim was an avid car enthusiast and lover of history. He was often seen carrying about the latest true crime mystery or historical biography and loved to engage in debates about politics and current events. An all-around great guy, Jim was dedicated to the care and protection of animals. His greatest joy in life was spending time with his grandchildren and “grand-dogs”.
He is survived in death by his wife Daria; his three children: Dr. James Celebrezze and his wife Dr. Jennifer Celebrezze, the Honorable Leslie Ann Celebrezze and her husband Dr Charles Zonfa, and the Honorable Nicholas Celebrezze; and his grandchildren Halle, Nina, Jimmy, Ian, Camille, William, and Luka; as well as his sister Monica Gall, of Findlay, Ohio, numerous nieces and nephews.
A private service was held for immediate family. A public celebration of life will be scheduled for a later date. The family has requested that, in lieu of flowers, remembrances be made in the form of contributions to Animal Protective League or the American Heart Association.

To order memorial trees or send flowers to the family in memory of James P. Celebrezze, please visit our flower store.