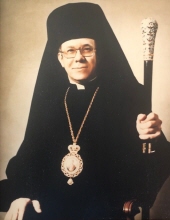 Most Rev. Robert M. Moskal, Bishop Emeritus of St. Josaphat Eparchy in Parma passed into Eternal Life, Sunday, August 7, 2022, after having received the prayerful support and consolation of the Sacraments.
Bishop Moskal was born in Carnegie, Pennsylvania on October 24, 1937. In 1951 he entered Saint Basil Preparatory School and College Seminary in Stamford, Connecticut. He completed his graduate studies in Sacred Theology at Catholic University of America and Saint Josaphat’s Ukrainian Catholic Seminary in Washington DC. He was ordained to the sacred priesthood in the Cathedral of the Immaculate Conception in Philadelphia on March 25, 1963.
Father Moskal served the Archediocese as secretary at the Archbishop’s Chancery in Philadelphia; the founding pastor of a new Saint Anne Ukrainian Catholic parish in Warrington, served two years on both the Archdiocesan Tribunal and as the editor of the Archdiocesan Weekly, a charter member of the Board of Directors of Ascension Manor; Vice-Chancellor of the Archdiocese of Philadelphia; pastor of Annunciation Ukrainian Catholic Parish; Chancellor of the Archdiocese and Rector of the Immaculate Conception Cathedral. He was ordained to the episcopate on October 13, 1981. On December 3, 1983, Bishop Moskal was named the first prelate of the new Eparchy of Saint Josaphat in Parma, Ohio and was formally installed on February 29, 1984. He resigned for reasons of age on July 29, 2009 and left this world on August 7, 2022.
Bishop Moskal is survived by his sister Elizabeth Boyle of Carnegie, PA and his personal caregivers Vladimir Kudliak and his daughters Tatiana and Anna.
Bishop Robert will lie in state in St. Josaphat Ukrainian Catholic Cathedral, 5720 State Road, Parma, Ohio 44134 on Sunday and Monday, August 14 and 15, 2022 from 6:00 PM to 8:00 PM.
Parastas/Order of Burial of a Bishop will be celebrated at 7:00 PM on Sunday and Monday.
Tuesday, August 16 Bishop Robert's body will be transferred to Holy Trinity Ukrainian Catholic Church, 730 Washington Avenue, Carnegie, Pennsylvania 15106 where he will lie in state from 6:00 PM to 8:00 PM. Parastas/Order of Burial of a Bishop will be celebrated at 7:00 PM
The Requiem Divine Liturgy with Order of Burial of a Bishop will be concelebrated at 10:00 AM on Wednesday, August 17 followed by burial at Holy Trinity Acres Cemetery in Carnegie.
In blessed sleep grant eternal rest, O Lord, to Your ever to be remembered servant, Bishop Robert, and make his memory everlasting. Everlasting memory!

To order memorial trees or send flowers to the family in memory of Most Reverend Robert Michael Moskal, please visit our flower store.