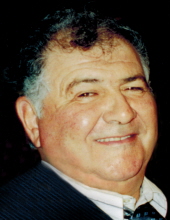 Tony (Fausto) D’Abramo passed away December 4, 2018. He was the beloved husband of Christine (Pawlak) for 51 years, cherished father of Gina Pilko (Joe, deceased), Bruno (Kelly), Mario, Rina (Joe Gulasey), and Tony (Lisa). He was the grandfather of nine wonderful children who affectionately called him “Peeboo”, and great-grandfather of three. He was born in 1941 to Colombo and Caterina D’Abramo.

The United States was Tony’s second home, having immigrated from Italy with his family in 1955. He served this country as a member of the U.S. Army from 1960 to 1963. As a civilian, Tony owned and operated his own construction company for 55 years. He worked tirelessly day and night, running his business and forging relationships that would last a lifetime. He devoted that same level of dedication to his personal life, working on his house, and raising his family. His home became the gathering place for family, friends, and the countless people he positively impacted throughout his life. He was happiest when the house was filled with people and laughter. It didn’t matter if it was filled with the people he knew best, or strangers who had never met him; all were welcome. He loved sharing a glass of wine, a meal, and great conversation. He often spoke of how happy it made him to sit back and listen to his kids and grandkids talk and laugh together. He was renowned for hilarious stories and passionate debates. And he was the main character in countless adventures of his own, most of which have become immortalized in family legend. In addition to being a beloved son, husband, father, grandfather, brother and uncle, Tony was a self-proclaimed inventor and pilot. He loved cars, machines, and anything with an engine. He enjoyed tackling a difficult mechanical problem, and creating just the right gizmo to solve it. And he could sing Pavarotti with the best of them. Tony believed that our time on this Earth was filled with many blessings and wonderful possibility. His legacy is a family that continues to believe this is true.

To order memorial trees or send flowers to the family in memory of Tony Fausto D'Abramo, please visit our flower store.