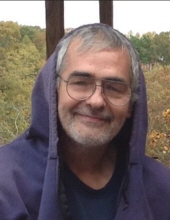 
Tony Sergey Shkurka departed this life and stepped into Eternity on Thursday, March 31, 2022. He was proceeded in death by his father and mother, Sergey and Ewdokija Shkurka, his brother, Terry Shkurka, his grandparents, Jacob and Maria Shkurka and Alois and Ahafia Hartner, and his aunts and uncles, Nicholas and Helen Hartner, Vera Iwaskewych, and Zenny Tryluk.

Tony was born on September 22, 1954, to Sergey and Ewdokija Shkurka in Cleveland, Ohio. He is survived by his loving daughter and grandsons, Christine (Cory) Johnson, Austin North, and Dylan North. He is the oldest of five siblings, Lillian (Victor) Rudiy (nee Shkurka), Terry Shkurka (deceased), Andrew (Brenda) Shkurka, and Michael Shkurka. His godmother is Aunt Maria (Uncle Steven) Telischak. His godfather is Uncle John (Valentina) Iwaskewych.

Tony “G” will also be missed by his closest friends, whom he thought of as a second family, Danny Ray Laney, Reda Sue Powers, and the Craigers, Danielle, Tim, Ben, and Liam.

Tony accepted Christ as his saviour and tried to live his life accordingly – with a “servant-spirit” attitude. Tony graduated West Technical High School in 1972. Upon graduation, he worked for Republic Steel Corporation as a safety operator. He later joined the United States Air Force where he served a 20-year military career circling the globe and from which he retired having achieved the rank of Technical Sergeant.
He was based in the United States and had tours of duty in Japan, Europe, and the Middle East. He excelled at whatever he did so much that he was asked to be a part of the “F-16" Tactical Fighter Demonstration Team that performed across the U.S. – but what brought him the most satisfaction was doing everyone’s taxes!! Tony received many “Awards and Commendations” for excellence of service above and beyond the call of duty for his country.

He leaves behind to cherish his loving memory: his children, grandchildren, siblings, aunts, uncles, cousins, nieces, nephews, and many, many friends!!

Memory Eternal – “Until we meet again Tony ... we are content knowing that you are in the Lord’s loving hands!!”

To order memorial trees or send flowers to the family in memory of Tony Sergey Shkurka, please visit our flower store.